Duncan Watmore focused on his studies after being released by Manchester United at 12. Then, seven years later, Sunderland came calling 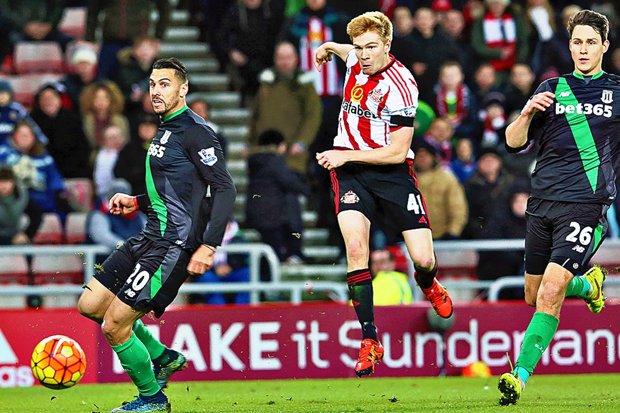 To sit down with a young footballer, who is scoring goals and making waves in the Barclays Premier League, is usually to hear talk of “living the dream”. It is a dream that Duncan Watmore quite happily abandoned during his teenage years, throwing himself into his school sports and his studies. University beckoned and, beyond that, he hoped, a job with a blue-chip company.

It has certainly not been the conventional journey to the Premier League for Watmore. His father, Ian, was the chief executive of the FA as well as the managing director of Accenture; his mother, Georgina, is a rector; he has brothers at Accenture, PricewaterhouseCoopers and Cambridge University.

He was rejected by Manchester United at the age of 12 and barely gave professional football another thought; at 18 he started off at Manchester University, “living a full-on student life” while playing non-League football for Altrincham; next Thursday, at 21, he will graduate in economics and business management from Newcastle University, as only the second player in the Premier League era to pick up a first-class honours degree. Professional football was never part of the plan, but he is loving every minute of it now that he has begun to adjust to the madness of it all.

“For a lot of footballers, everything, from a young age, has been building up to this stage we’re at now,” the Sunderland forward said at the club’s training ground yesterday. “For me, it wasn’t like that. I was training with United, with Tom Lawrence and Tyler Blackett up to the age of 12, but then I was released. I suppose football did define me up to that age; at school I was ‘the kid who’s at United’.

“Then you’re just the kid who plays for the school team. That’s hard to adjust to when football is your thing, but I quickly found I was doing everything I wanted to be doing — not just football but playing cricket, playing rugby, athletics, socialising with my mates, different hobbies, different activities.

“I still played and watched football, but I never even considered going to another academy or anything like that. I don’t think I was even good enough at the time. I moved on and forgot about it.”

Watmore was playing for Altrincham’s first team when he started his degree course in September 2012, but he says: “I wasn’t even thinking about being a footballer. I just thought I would finish my degree and use economics to go and get a job somewhere.

“I was a full-on student in that first year. Ten of us were living in a flat in Fallowfield with a communal kitchen. Everyone around me was always going out, drinking, and, to be honest, because I hadn’t gone down the football route, I hadn’t realised what a taboo drinking was. You can’t do it.

“For the first couple of months at uni, I was going out and making friends and the manager at Altrincham [Lee Sinnott] quickly realised my performances had dipped. He took me to one side and said, ‘I know how difficult it is, juggling both sides of life, but . . . ’ So when my friends were going out three times a week, I would go out once a week. I could still afford to do that when I was at Altrincham.”

In May 2013, though, after a prolific season at Altrincham, Sunderland came knocking. Watmore says their interest came as a “big shock”, but once it became clear he could continue his degree course, by transferring to Newcastle University, he and his family felt it was an offer that was too good to turn down.

“It was completely different when I moved up here,” he says. “My first year, in Manchester, I was like any other student. My second and third year, I was living on my own, training full time with Sunderland, getting back at 4pm and then working on my degree in the evening. I didn’t really know anyone on my course.”

How come? “Because I couldn’t make the lectures or the seminars,” he says. “It was a night-time thing for me, watching lectures online, catching up on reading and writing essays. It was hard work, especially the third year, but I couldn’t complain. There are much worse jobs you could combine with a degree course. It was also good that economics gave me an escape where I could focus on something completely different to keep me academically stimulated.

“In my final year I had advanced macroeconomics, advanced microeconomics, a lot of statistics-based stuff, one on business innovation, one on how you run an organisation. It was hard work, but it was great.”

Watmore was regarded with curiosity by some of his Sunderland team-mates, most of whom had been in professional football since leaving school at 16, but the fascination was mutual. For example, he was astounded when he belatedly realised they got free boots, courtesy of their sponsors.

“If I’d really thought about it, I would probably have worked that out,” he says, “but there are things in football that you don’t realise until you’re in it. Another thing is that the players are just nice, normal people — and intelligent people — who happen to be good at football. You can’t get by in this game without intelligence of one form or other. There’s banter, of course, and some of them are always asking me to sort out their mortgage. I tell them I don’t want to lose their money.”

Watmore’s stock was rising. The coaches at Sunderland marvelled at his speed and his directness on the ball, which set him apart from some of his peers, who had come through the academy system. “When Sunderland signed me, Robbie Stockdale [the coach] told me: ‘We’re not going to coach that out of you. It’s something you’ve developed and we’ll keep that, but we’re going to build up the other sides of your game,’” he says.

Does this reflect a growing concern that Premier League academy graduates are being smoothed down too much from a technical viewpoint, as well as the more serious issue of having attitudes softened by a culture of “too much, too soon?”

“There are two ways of looking at it,” Watmore says. “I would say maybe I have got what coaches call ‘rawness,’ which hasn’t been coached out of me. That has always been my game. The other side of the coin is that ever since I came to Sunderland, my game has gone from here [holds hand at hip height] to way up here [holds hand at shoulder height]. The facilities and coaching have been unbelievable, so I wouldn’t use it as any kind of criticism of the academy system.”

Fearlessness is another characteristic, despite his unfamiliarity with some of the big stages on which he is performing. “It is strange at first, playing with and against people you’ve watched on TV for your whole life,” he says. “I was definitely nervous for my first game or two, but you quickly get used to it, the big names and the big crowds. I’ve embraced it. I don’t think nerves inhibit me. The manager [Sam Allardyce] and his staff have been a huge support. I’m just excited about the games I’m playing and pleased we’ve won the last two.”

What about the next one, Arsenal away tomorrow? “Can’t wait,” he says. “I’ve never been to the Emirates before and it would be great to be involved. My dad is a big Arsenal fan and one of my brothers is too. I like to think they’ll put their allegiances aside for one game.”

On Thursday the former FA chief executive and the rector of Tarporley will attend their son’s graduation ceremony. “I’m really looking forward to it,” he says. “I worked hard for it, I’m proud of that and now I’m focusing on the football.”

Long term? “Yes, for as long as I can,” he says. “Now that I’ve had a taste of it, I love it, but you never know how things will work out. You can get injured, so you need to have a fallback option. After football, I’d like to think I would go into business, but I’ll have to keep up-to-date because otherwise a ten-year-old economics degree isn’t very useful.”

One final question: as an economist, what does Watmore make of football’s relationship with money? “Erm, good question,” he says. “I think it’s best at the moment for me to be less opinionated about that matter . . . ”

Socrates: As if starring in Brazil’s wonderful 1982 team wasn’t enough, the heavy-smoking playmaker completed a medical degree and a doctorate in philosophy — and found time to turn Corinthians, his club, into football’s first democracy.

Steve Coppell: The winger joined Manchester United after he had started an economics degree at Liverpool University and only signed a contract after being assured he could continue his studies.

Pablo Alfaro: One of the most notorious hard men in Spanish football for more than a decade and yet, oddly, a qualified doctor. The two combined rather neatly when he was caught performing an impromptu “exam” on a player he was marking at a corner.

David Wetherall: The only Premier League footballer before Watmore to take a first-class degree, he graduated from Sheffield University in chemistry in 1992, having already played for Sheffield Wednesday. The defender went on to play for Leeds and Bradford City.