Cycle Revolution at the Design Museum: the hottest show on two wheels 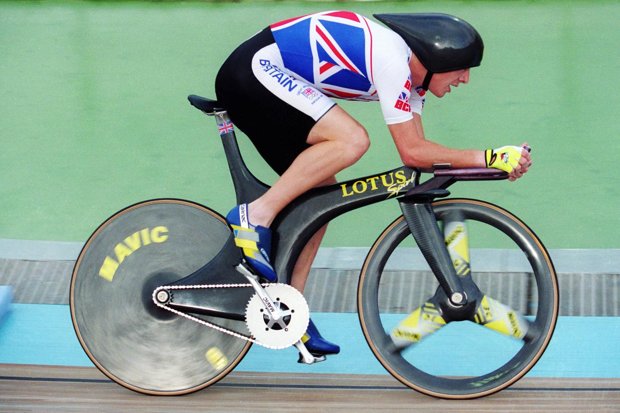 For the Museum’s final show at its site on London’s South Bank before it moves to the Commonwealth Institute building in Kensington, the curator Donna Loveday wanted to focus on “something that really captures the movement. Cycling is so popular: over the past 15 years there’s been a huge growth across lots of different areas.” In the UK it’s at a 24-year high, with 5 billion kilometres (3 billion miles) covered by bike in 2014.

Loveday’s initial aim was to do something about the history of bike design, “but that’s something that other museums had done very well, so I thought: ‘Why don’t we look at where cycling is now and where it may take us in the future?” No penny-farthings, then — although they do have their teetering modern cousin, the 2m Tall Bike, which its inventor, Peter Georgallou, says is excellent for keeping your feet dry and, worryingly, seeing over people’s hedges.

It quickly became clear to Loveday that many of us “are obsessed with cycling. It means so much to people and it’s actually quite tribal.” The main part of the exhibition is divided into four sections, each dedicated to a “tribe” and championed by an advocate.

The high-performance section is a shrine to the skin-suited superheroes who have helped to make us the No 1 nation on two wheels, while the thrill-seekers area looks to BMXers, mountain bikers and lunatic downhill specialists. The urban riders section focuses on unsung commuters on their neat little folding Bromptons, while cargo bikers is devoted to peoplesuch as Jeremy Davies, who built the Rocket, a sedan-like tricycle with padded seats, to ferry his children and dog to the beach.

The high-performance section is an obvious crowd-pleaser and, with the six-time Olympic champion Chris Hoy as its mega-thighed advocate, is unashamedly patriotic. And why not, given that cycling is one of the few sports the UK is genuinely good at? Yes, there’s Ernesto Colnago’s Italian steel bike, slender as a supermodel, on which the peerless Belgian Eddy Merckx set his famous hour record (where you do as many laps of a track as you can in an hour) in 1972. Other than that, this is about world-beating Brits, with bikes belonging to Chris Froome, Wiggins (who now holds that hour record) and pursuit champion Joanna Rowsell, whose spartan regime is displayed in an infographic (track, gym, more track, lots of protein shakes — and if she brings the wrong kit she is sent home).

One of the first exhibits you see is the machine that helped to launch our pedalling renaissance: the space-age Lotus 108 that Chris Boardman used to win the 4km pursuit at the Barcelona Olympics in 1992. Boardman’s was the first cycling medal Britain had won in 72 years; since then we’ve won 36. If any bike is worthy of hanging in a museum, this is it: a rhapsody of curves in stealth-bomber black that still looks futuristic almost a quarter of a century later. “The focus is British,” Loveday nods. “It’s to say, ‘Look at where our cyclists are now’, which wasn’t the case when Boardman won.”

There’s a decent gender balance among the featured cyclists and child-friendly exhibits, including a photo op on a Tour de France-style podium. Even so, I predict a disproportionate number of mamils (middle-aged men in Lycra), cooing over Froome’s oblong chain ring and Mark Cavendish’s HTC racing jersey. The latter is donated by Paul Smith, fashion designer and cycling nut, and signed “To Paul, one of the best friends I could ever hope to have”. There are even vintage woollen jerseys from the dark ages before Lycra. “When they got wet they were incredibly soggy,” Loveday says.

The show understandably focuses on the pleasures of cycling, although the thrill-seekers section, whose advocate is the former world BMX champion Shanaze Reade, has a reminder of its perils. Martyn Ashton is a champion mountain biker who broke his back and was paralysed from the waist down. A video installation shows him descending a vertiginous slope after his injury on a specially modified bike.

If you’re really serious about bikes, modifications are what it’s all about: getting your own bespoke model made by hand. The section devoted to bike makers will really have the mamils salivating, with video clips of six award-winning British bike makers in their workshops and a bicycle built by each of them. My favourite was the gorgeous creature with the slanted handlebars and super-sized, foot-wide chain ring, made by Tom Donhou in (of course) Shoreditch.

The commuter and cargo sections are, inevitably, less sexy, although there’s still something serene about the Royal Dutch Gazelle, that classic Amsterdam cruiser with a basket on the front. And one of the most gobsmacking designs is the 1990 X-bike, made for Clive Sinclair, which folds from an X shape to an “I” that can fit in an umbrella stand. I was surprised not to see a cycle rickshaw, given how ubiquitous they are on Charing Cross Road at closing time.

After the flagwaving of the opening galleries, the final section focuses on ten cycling cities around the world, including Bogotá, Tokyo and Seville. “We wanted to look at how cycling infrastructure is developing in each and how designers are responding to the needs of 21st-century cyclists,” Loveday says. Impressively, it seems: there’s the world’s first suspended cycle roundabout, hovering above a motorway near Eindhoven; rotating ferris-wheel-style bike hangers in New York; and a plan in London to convert disused Tube tunnels into subterranean cycle paths whose users will generate electricity.

Alongside are the bikes on which we may scoot around these cities in the future. There’s the Sail GB3, a leaning, folding trike that you lie in rather than ride (just don’t call it a recumbent bike: they don’t like that). Sustainable materials seem to be a thing too: ash, plywood, even bamboo, plus the SplinterBike which, says Loveday, “broke a land speed record for wooden bikes [a modest 11mph] and is just held together with glue — no screws”.