If evidence were needed of boxing’s standing as the hippest way to get into shape, let me tell you that as I walked in for my punching session with James Duigan at his swanky new Bodyism club in Notting Hill, the model Lara Stone had just walked out. 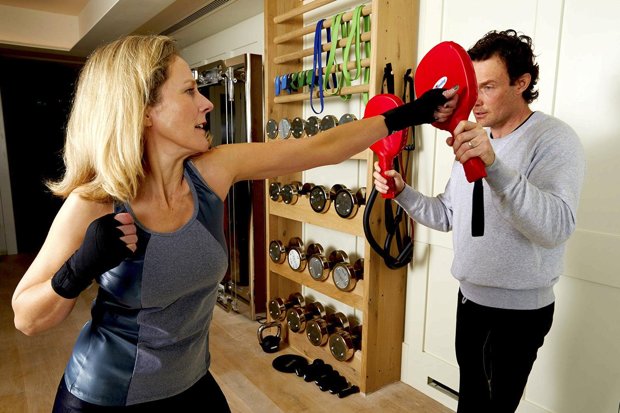 In New York, the Victoria’s Secret models maintain their impossibly tight physiques through daily sessions with former professional boxer Michael Olajide Jr at his sleek Aerospace gym, while Gigi Hadid mixes boxing in her training at the nearby Gotham Gym. Cara Delevingne has posted ringside selfies, Ellie Goulding says boxing leaves her feeling “empowered” with better stamina when she is on stage, while Pippa Middleton has credited the exercise form with banishing her bingo wings and back fat, describing a typical session in sweaty gloves as “a pure but pleasing agony”.

It’s a trend that men have been following for some time, led (predictably, perhaps) by David Beckham. He and eldest son Brooklyn are regulars at Box Clever in Kennington, south London — Duigan trained there on occasions before setting up his new flagship base. He recruited experts such as former schoolboy champion George Veness to help coach regulars in an environment that is a far cry from traditional boxing gyms.

It is partly this kind of boutique overhaul that has massively increased the sport’s appeal to women. That and the unrivalled body benefits. “I met an über-stylist to the stars who says the first thing she does is to tell people to stop running — it drains the face and makes your boobs sag — and to start boxing,” Duigan says. “Taught correctly it will help you get leaner, will improve your cardiovascular fitness and enable you to get an extremely strong core.”

Just ten minutes into our session, it is easy to see how this might be the case if you box regularly. To start, I am throwing punches from my shoulder. “There is no power, no body involvement,” Duigan says before correcting my technique to ensure I engage my hips and legs. “Punching shouldn’t come from your arms, but from your feet, your big toe,” he says.

Immediately, I feel the difference. My abdominal muscles go into overdrive and my punch is more powerful. “I’ve got clients who ring me the day after a boxing session saying their core muscles are aching unlike after any other workout,” Duigan says. “As you get more proficient, you use faster footwork, which makes it much more of a cardiovascular workout.” It is, of course, a tremendous upper-body workout and, given that an hour of boxing can burn anything from 600 to 1,000 calories, it’s not difficult to see how it leads to leanness.

Within the fitness industry, there is talk of boxing classes usurping cycle studios as the group sessions of 2016.

At the end of my session, I am weary, not just from the moves, but
from the effort of concentration and focus.

“It’s a tough and rewarding sport,” Duigan says. “But because of that, it demands respect.”
bodyism.com

How to box yourself fit, by James Duigan
Warm up with 3 min of skipping. Then practice the following basic moves for 1-3 min each. Remember that all boxing moves start from the feet and engage the lower as well as upper body to provide power for your punch. Always begin with the basic stance — feet shoulder-width apart with your left foot in front (if you are right-handed). Hands should be positioned at chin level (the guard), palms in and elbows tucked in.

Jab
With your lead leg forward, extend your left arm (or right if you are left-handed) out towards your imaginary opponent. Keep the other hand tucked by your chin. Keep shoulders high and knuckles facing the ceiling as you “jab”. Emphasise rotation, working the abdominals as you move. As you recover your lead arm, the rear foot moves forward to return you to your basic stance.

Right cross
This move is also known as “the straight” and is a power punch thrown with your dominant hand. Keep your left hand guarding your chin, throw your right arm slightly across your body from the chin towards the imaginary opponent. As you throw the punch, rotate your torso and hips anti-clockwise, simultaneously transferring weight from the rear to the front foot. This should be a quick pivot movement of the feet. Return the arm back to chin level and the “guard” position by the chin.

Left hook
From the basic stance, bend your left arm and twist your torso to the left. Keep your right hand at your chin as a guard. Pivot your left foot towards the right. Keep your chin down, your head facing forward and your left arm locked at a 90-degree angle. Then power your punch, aiming to strike your imaginary opponent squarely on the chin. Balance is important — don’t twist so much that you fall over. It’s a fast and fluid movement, after which you should return to your basic stance.

Left upper cut
The upper cut is a really powerful punch thrown from the waist upwards towards the imaginary opponent’s chin. From the basic stance, transfer your weight on to your left foot and twist your shoulders and hips hard to the right, bringing your left forearm up. Try not to lean back as you do this or you will be off balance. Your shoulders, hips, leg, and feet, should all pivot at the same time. It is a short punch up to chin level and once you have done it, relax the arm to release and return back to the “guard position” with hands at your chin level.